Risk management is done in a planned way in business world. The task of managing the uncertainty is to be undertaken by all,they denote minimizing the dangers/concern to low levels so the normal course of things are in place as usual with equanimity.

If things are certain, risk need not be managed. Humans have created the broader term of risk management to systematically anticipate various sort of uncertainty arising due to various factor perceived in the business world,it tend to systematically identify,measure and suggest preventive measures and vigilance against factors that could cause the risk.
the un certainty  of the worst kind are more pervasive today,in the guise of political,economical,social etc,which have more so become unpredictable and are exploring the newer frontier of its range.
the things which were appearing to be certainities ,like -the reaping the dividend of young population,the same appears to be turning in liability in some parts due to the uncertain political and economical environment and infrastructure,cultural and ethical issues etc.

Risk management is certainly about the future unpredictable outcomes and it gives weight to the uncertaities and the risk management strategies includes the /are based on the probabilities based on the information complied/generated and analysed.
The risk could be managed with the larger framework of free and fair play of rules and regulation and in such an environment the management of positive factors ,innovation,new growth plan,exploring vast horizon ,creating better productivity,distribution gains and contributing to the society and stakeholders is there. 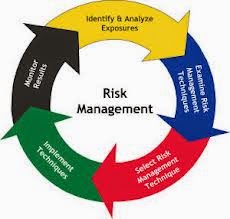 Risk management is more so concerned with the genuine risk ,the insurance against disasters,its the guarding the frontiers with vigil,so that the competitor could be kept at bay.
When the very basis is wobbling,yet the continuity is the core with better alignment with the times to come,the times are not same,the change is the part of civilization,the strategies are to be developed according to time to be relevant.
In the business world one need to guard against the technological risk ,and limiting the cost,the finance  cost again and again in longer time should always remain in control so that the larger shocks are avoided in uncertain time.
the newer concept do not develop as one perceive ,the time frame and the content approved by populace is not predictable,the wall of certainity may be whatsoever fragile,no one wants to leave it easily and try the other wall of durability,which is of strange hue and fragrance.

Much of the risk and uncertainty are the creation of fear full mind,the managing fear to the right extent is necessary ,so that the risk could be managed genuinely.
the faults and collapse is on the part of other one denizen of other part of globe,yet the impact is every where in the connected world.